A friend and I just accidentally invented a fun game. I like it because it cutely illustrates the current completely ridiculous state of our understanding of human nutrition. Namely, there’s an amazingly long list of things that people think about nutrition–such a long list that it’s just really really hard to imagine even a small fraction of these things actually being true.

For example, let’s choose gluten and autism. Here’s what I get: 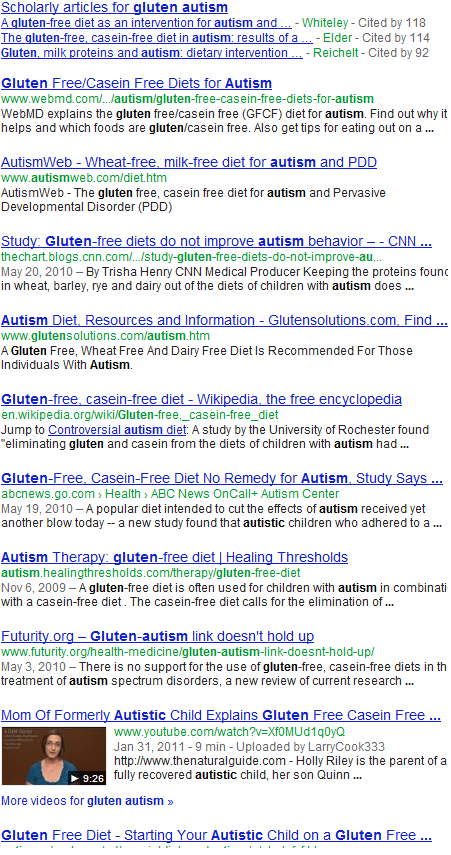 (Note that your results may vary a bit, especially if you’re not in the United States or are currently logged into a Google account. The gist should be the same, though.)

I chose gluten and autism entirely because they’re the first two seemingly unrelated things that popped into my head, and there are 3.3 million results! There are preliminary studies that are essentially useless for drawing conclusions (because of small sample sizes, lack of control, etc.) that are nevertheless widely cited; there are lots of websites devoted to telling people that a gluten-free diet will cure autism; there are some news articles and the like about larger studies that show absolutely no effect and debate the plausibility; and, there’s even a video of a woman who claims that her child’s autism was cured by a gluten-free (and casein-free) diet. (The woman is selling something, of course.)

And, these results are roughly typical, as you can confirm yourself. Indeed, if you Google just about any combination of a food/nutrient and something related to your health, you’ll find that lots of people believe that the two are strongly linked. Check out what fish oil reportedly does to men’s penises or the surprising effects that calcium probably doesn’t actually have on your weight or what some people think spinach does to your vision. So far, I think that the funniest one that I’ve found is the reported effect of breast milk on Alzheimer’s disease.

Anyway, I thought that was kind of funny. Here’s a little script I wrote so you can try it yourself. Seriously, give it a try.

4 thoughts on “The Nutrition Google Game”